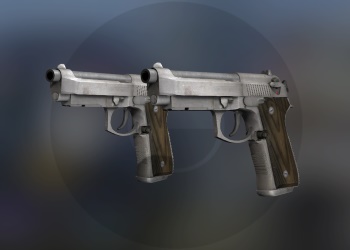 The Dual Berettas have two large magazines that can be rapidly fired towards a target dealing massive damage. It has a long reload time taking a total of 4.6 seconds to reload however because of the large number of bullets you won’t need to do it too often on eco rounds. Their low accuracy means that they are rarely used in competitive play.